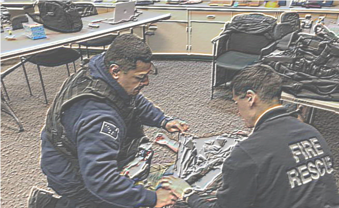 Nearly six years after Arlington County Fire Department introduced the modern concept of the Rescue Task Force (RTF) model for emergency medical response to active shooter incidents, many agencies have yet to even discuss the topic, let alone begin training their personnel to mitigate this ever-increasing threat in our communities. A common reason offered for this lack of planning is, "Well, we have SWAT medics with tactical EMS training in our area that will respond."

Tactical Emergency Medical Support, or TEMS or SWAT medics, is certainly one option for managing multiple casualties in a high-threat environment, but having it as the only option for your community is less than optimal for two important reasons.

1. TEMS is for the SWAT team

The focus of TEMS providers is on the overall health and well-being of the SWAT team itself. Their mission is to protect the protectors by being immediately available for downed officers and to provide medical intelligence that may be of tactical value to command staff.

2. TEMS providers are a SWAT asset

Tactical medics do not deploy independently. They are a SWAT asset under SWAT command with a typical SWAT response time that far exceeds the typical duration of active killing that occurs during such incidents.

The RTF model focuses on the needs and care of the victims of a mass shooting. RTF providers work with the first-arriving patrol officers to deliver immediate medical intervention for readily treatable injuries, like severe bleeding and airway compromise, which stabilizes victims for evacuation to definitive care.

RTF providers do not wait for police to secure the scene while victims lay bleeding to death inside the perimeter. They respond with police into the warm zone to find victims, even as other officers search for and neutralize the suspect.

Both TEMS and RTF have their place in the continuum of medical care when it comes to acts of active violence, but we must begin focusing on wider acceptance of RTF integration into police response to make any meaningful impact on morbidity and mortality when active shooter incidents occur.
r paragraph here.